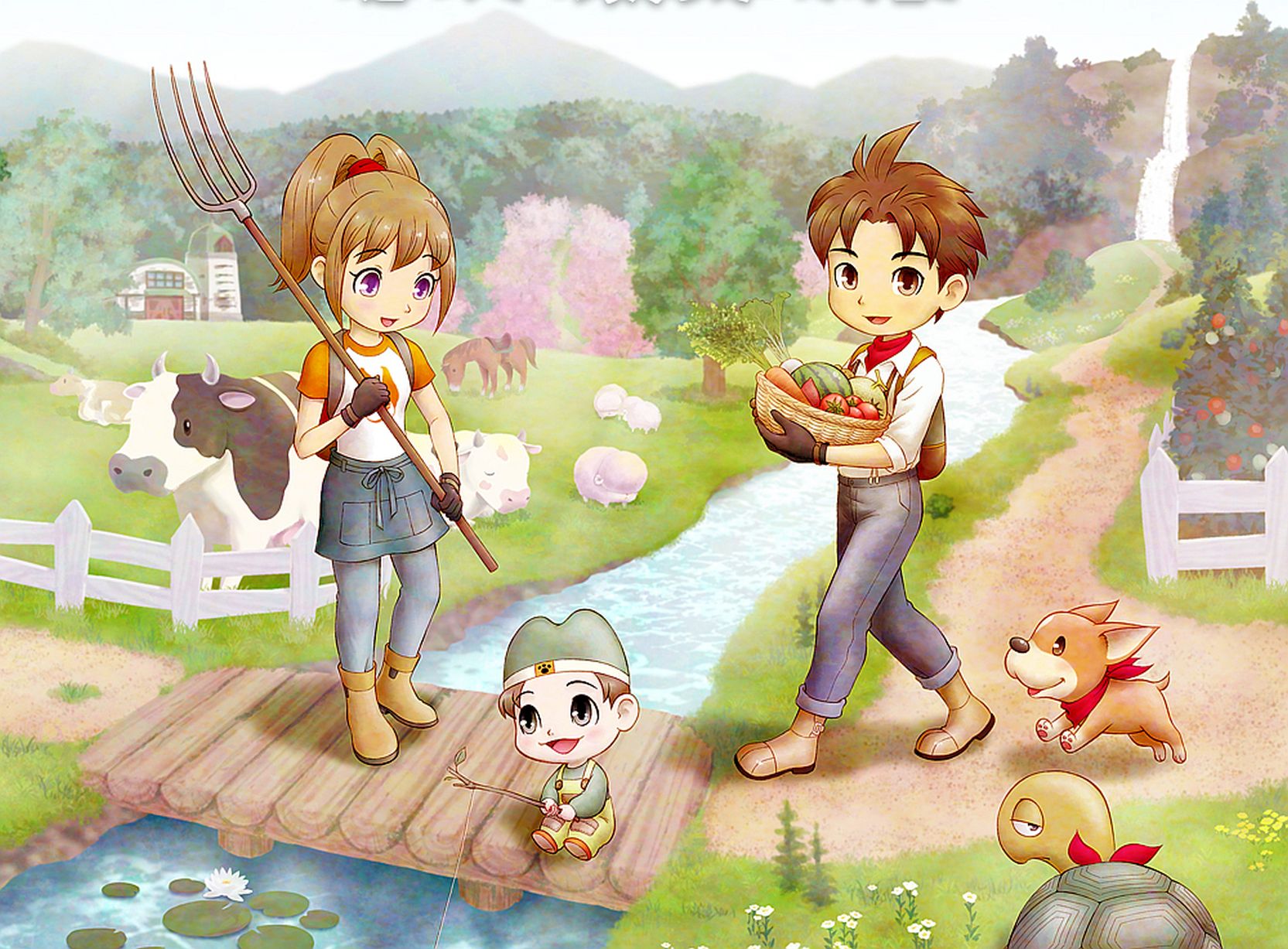 Nintendo made all sorts of announcements during its hour-long Nintendo Direct presentation today.

There were so many announcements you may have missed a few, but we have put together a list of the games that may have slipped past you.

One of the games announced was It Takes Two, which will finally arrive on Switch on November 4.

Fatal Frame: Mask of the Lunar Eclipse was announced by Koei Tecmo, and not only is it coming to Switch in early 2023 but it will also be released for PC along with PlayStation and Xbox consoles.

The original game, released exclusively in Japan in 2008 for Nintendo Wii, has been remastered and will be made to play for the first time in Europe and North America.

It takes place a decade after five girls mysteriously disappeared at a festival on Rogetsu Isle, an island in southern Japan. While all of the girls were eventually rescued, their memories were lost, with only the faint remembrance of a single melody and a seemingly possessed masked woman dancing in the moonlight. Now, ten years later, with still no memory of the events surrounding their disappearance, two of the five girls have died — discovered with covered faces and found in a tragic, crying pose. The remaining three girls now head off to the eerie island to solve the mystery of their friends’ death, while also unlocking the mystery of the memories left behind.

Sifu was announced for Switch today as well. The critically acclaimed title will be released on November 8. And starting today, you can pre-order the Kung-Fu-packed brawler from the Nintendo eShop or physically from select retailers with a limited Vengeance or Redemption Edition to choose from.

The second batch of Xenoblade Chronicles 3 DLC was shown during the presentation, and it finds you meeting the new hero Ino who looks a bit mechanical. Complete her quest and she’ll join your party, expanding the classes and gameplay options available to you.

As part of the Expansion Pass, the DLC will also include Challenge Battles where you will test your might in consecutive battles against tough enemies. Accessories and special outfits can be earned by challenging stronger and stronger enemies.

Wave 2 of the Xenoblade Chronicles 3 Expansion Pass launches on October 13, and there will be two more contents dropped as part of the expansion through the end of 2023.

Some disappointing news was announced during the Direct today. Turns out, the Nintendo Switch Sports Golf update has been delayed from fall to this winter. At least it’s not too bad of a delay, still, a delay is a delay.

Fae Farm is a new game coming to Switch, and it’s a farm-sim RPG for 1-4 players. With up to three friends, you will craft, cultivate, decorate, and grow a shared homestead. You can use spells to explore the enchanted island you’re on, and forge bonds with residents. Discover fae magic and trek across mysterious realms, and as the seasons change, you’ll use all you’ve learned and discovered together to restore the world around you. The game is launching exclusively on Nintendo Switch in spring 2023.

The weekend of September 23-25 will see the first Splatoon 3 Splatfest go live. The theme is: What would you bring with you to a deserted island? Gear? Grub? Or fun? Pick a side and get to splatting.

Rune Factory 3 Special is being reborn on Switch. In it, you will need to restore peace between humans and monsters in between chatting with the locals, cultivating crops, and caring for monsters, among other activities. You can also transform into a monster, and your battle abilities and conversations with the locals will vary depending on your form. Your choices will also cause different events to occur.

A new mode has been added to help you enjoy more quality time with your in-game spouse, too. Rune Factory 3 Special launches on Nintendo Switch next year. Plus, a new Rune Factory series will launch in the future, so stay tuned for more details.

Radiant Silvergun, the classic arcade shoot-’em-up, has been released for Switch today. Fire different types of weapons to take down waves of enemies, and defeat multiple enemies of the same color for a chain bonus or take down different colored ones for a secret bonus.

Coming to Switch in spring 2023, Ib tells the story of a young girl who visits an art gallery. While strolling through the busy exhibit, she finds one particular piece drawing her in.

In this 2D exploration adventure, every decision affects the girl’s fate, and there are seven different endings to unlock based on your actions and choices.

Tales of Symphonia Remastered, a remastered version of one of the most loved Tales Of stories, is coming in early 2023.

The original Tales of Symphonia, which was released in 2003, has been updated with HD visual enhancements, gameplay improvements, and new features. The title is slated for release on PS4 Switch and Xbox One, and will be compatible with PlayStation 5 and Xbox Series X/S.

Harvest Moon: A Wonderful Life is getting a remake in the form of Seasons: A Wonderful Life. In Forgotten Valley, you’ll restore and expand your farm as you nurture crops, care for your animals and help the land flourish. Befriend the townsfolk and you might even meet your future partner and start a family.

In this installment, those around you will grow older as time goes on. Your child will also pick their future life path depending on how you influence them.

First released for GameCube in 2003, followed by PlayStation 2 in 2004, A Wonderful Life will be released summer 2023 for Nintendo Switch.

Atelier Ryza 3: Alchemist of the End & the Secret Key is coming to Switch Ryza on February 24, 2023.

In it, Ryza and her friends set sail to investigate the strange islands that have appeared worldwide. You and 11 heroes from all walks of life will join your party as you freely explore a vast world and forge your path in this lively RPG.

Fancy a bit of boxing? Well, then you are in for a treat when Fitness Boxing: Fist of the North Star comes to Switch in March 2023. In it, you will box familiar faces from the popular manga and animation series. Kenshiro will be your instructor in Exercise Mode, leading you through various boxing drills. Defeat as many enemies as you can with just your fists in the new Battle Mode or take on rivals in Boss Battles.

Master Detective Archives: Rain Code comes to Switch in spring 2023, and has you investigating crimes. In the game, you will dive into the supernatural as an amnesiac detective and the spirit that haunts him. Brought to you by the creators of Danganronpa, as Yuma, you will take on unsolved cases at a Detective agency, and thoroughly inspect crime scenes to gather clues and evidence. When you’re ready, the spirit Shinigami will conjure a realm tying the crime scene to the truth – a Mystery Labyrinth. Mystery Phantoms will attempt to hinder your progress during each case, so you will need to avoid their barrage of falsehoods and contradictions.

Another farm game, Harvestella, is coming to Switch on November 4. As you cultivate a peaceful farm life in the village of Lethe, the season of death continuously returns, threatening to destroy all. Travel the world and find a way to put an end to the calamity in this life-simulation RPG.

Later today, a demo containing the opening days of your farm’s first season will be available in Nintendo eShop and the My Nintendo Store. Save data from the demo can be transferred to the full game once purchased.

The sequel, Front Mission 2, previously unreleased outside of Japan, has you taking advantage of additional features, like more terrain effects, weapon and armor attributes, and over 80 new skills. You can also test your mettle at the Colosseum and use the Network system to gain intel on events as they unfold. The remakes will launch next year. Plus, a remake of Front Mission 3 is also in the works. Stay tuned for more information in the future.

Various Daylife tasks you with living your best life on the newly discovered continent of Antoecia. This immersive RPG combines familiar adventure-RPG mechanics with simulation RPG structure such as job progression, strategic exploration, and an innovative battle system.

In it, you will live your best life and confront the unknown by completing over 100 types of daily tasks to build character and deepen your relationships with the locals. Along the way, you’ll gain access to different job classes and abilities. It’s out today on Switch.

Endless Dungeon is finally coming to Switch, but you will have to wait next year for it. If you aren’t familiar with the game, in this rogue-lite game, you recruit a team of shipwrecked heroes and make your way out of a rundown space station. Set in the Endless universe, you’ll have to fend off continuous waves of monsters as you make your way through procedurally generated levels. You will also complete quests to unlock new heroes, weapons, and station areas. And you can bring along two friends for the ride as it supports up to three players in online co-op.

The launch date for Crisis Core Final Fantasy 7 – Reunion was confirmed in today’s Nintendo Direct presentation. The game features a complete HD graphics overhaul, newly arranged soundtrack, and an updated combat system, and begins seven years before the events of FF7 and follows Zack Fair, a young Shinra Soldier operative. As his adventure unfolds, he discovers the dark secrets of Shinra’s experiments and the monsters they create. The game will be released for Switch, PC and PlayStation and Xbox conolses on December 13.

Also announced during the presentation was SpongeBob SquarePants: The Cosmic Shake for release next year; a second free update for Mario Strikers: Battle League, the multiplayer party game OddBallers is coming to Switch early next year; Tales of Symphonia Remastered with enhanced graphics and improved gameplay is coming to Switch in early 2023, and Factorio, a sci-fi management sim game, was announced for an October 28 release on the system.